There are many ways for quality control in cataract and refractive surgery. A careful follow up on treated patients, well documented in patient files is the first step and usually done in every refractive clinic. Commonly available software such as MS-Excel may help to get a better overview on outcomes of your surgery. One may even go a step further and incorporated a more appropriate database software such as MySQL, FileMaker, FoxPro or MS Access to enter and analyze data. This already requires some programming skills and experience in order to make it work. The amount of time and after all - money - which needs to be spend for an own, clinic specific database application is substantial.

Its clearly the better choice to use commercially available outcomes analysis software such as Datagraph-med© . Started in 1998 as 'engineers tool to refine excimer laser nomograms', it became one of the most popular software tools for refractive surgery outcomes analysis. Now, beginning of 2015, Datagraph-med is used in more then 50 countries and hundreds of refractive clinics around the world and extends its range of use from laser refractive to refractive cataract surgery.

The main feature of Datagraph-med however is, the instant generation of 'presentation graphs' which are always updated as soon as new data is being entered. Fully integrated in MS Office 2013 (and the former version Office 2010) it becomes possible to prepare lectures and PowerPoint presentations 'on the fly' (e.g. on the way to the next congress!).

An other important feature of Datagraph-med is the separation of the actual data file (called 'back end') from the database application software (called 'front end'). By doing this, one can have different database files for different patient groups and backup or transfer your data easily and independent from the Datagraph-med software itself. The data file can be stored on a server and accessed from several users at the same time. 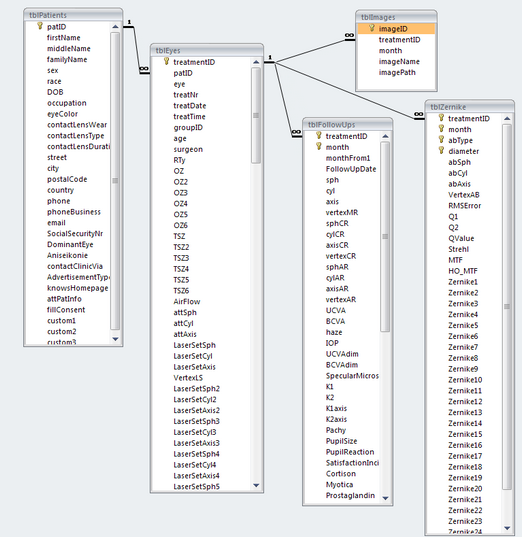