When starting the advanced nomogram tool you may see a warning message 'Dataset contains cases of mixed astigmatism'. This warning appears whenever the selected data set contains eyes which have laser settings resulting in a mixed astigmatism treatment. (cyl > sph with cyl and sph having different sign)

In case this warning appears you should review your data set and exclude such cases from analysis before continuing.

After that you may see a second warning message 'large deviations from target'. This warning appears whenever the selected data set contains eyes which have more than ±2 D of difference between laser settings and achieved changed of refraction because differences of ±2 D or more seem unlikely and may be due to typing errors or other reasons. You should review, verify and if necessary exclude these cases from analysis before continuing.

In case one of the two above warning messages appeared a table with the currently selected data set will open, sorted by the absolute value of the difference Laser Setting (SEQ) - Achieved (change in) SEQ. (Column heading = |Err.SEQ|)

A double click on the patient name which is on top of the list brings you directly to the data entry form of this treatment which has the largest deviation from target. Correct wrong data or exclude this treatment by using the 'exclude from analysis' check mark.

Note: Sorting is possible by every column which may help you to find outliers in your data set. To sort click on column headings, a second click on the same column heading changes sort order.

We recommend to sort by the following columns and check for and exclude extreme values as they might have a negative influence on the the accuracy of the regression analysis.

1.) LSRTy - the refraction type calculated from the entered laser settings. Mixed astigmatism treatments have to be excluded and only myopic or hyperopic treatments should be analyzed at a time. Do not mix hyperopic and myopic treatments when analyzing your data!

2.) |Err.SEQ| - this column shows cases with the largest deviation between attended and achieve SEQ on top of the list when sorted. The deviation is given as absolute value.

3.) Err.Sph - this column shows cases with the largest deviation between attempted and achieved spherical correction. It can be positive or negative and you must sort in both ways to find all outliers.

4.) Err.Cyl - this column shows cases with the largest deviation between attempted and achieved cylindrical correction. It can be positive or negative and you must sort in both ways to find all outliers.

The advanced nomogram screen may come up as on the image below. In this case the selected data set contains only spherical myopia treatments. Only the left scatter plot is displayed, showing laser settings for sphere (x-axis) vs. the achieved change in sphere (y-axis.). Nomograms can be made, but only for treatments of spherical myopia. 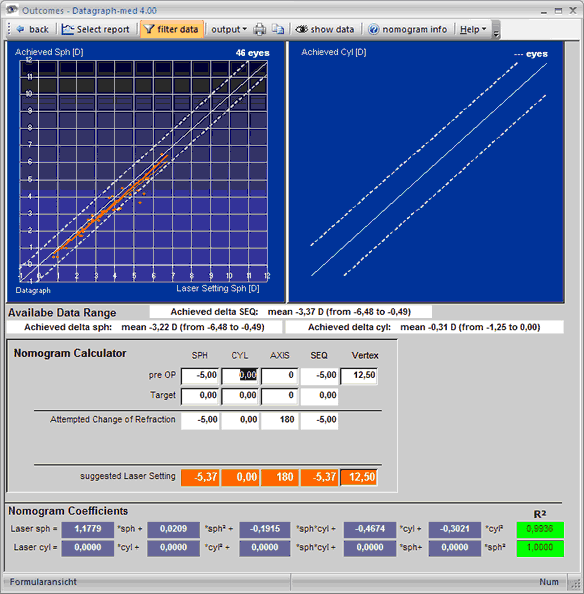 The Available Data Range is indicated directly under both scatter plots. This is the range of achieved corrections from your current data set and nomogram calculations will be limited to be within these boundaries.

The Nomogram Calculator allows you to enter preOP and target refractions including vertex distance and then automatically calculated the suggested laser settings. You may enter preOp refractions in plus or minus cylinder notation.

Note: suggested laser settings will always be given in minus cylinder form. You may have to convert these in case your laser asks for plus cylinder refractions!

At the bottom of the window Nomogram Coefficients are given as well as the coefficient of determination (R²). These coefficients are the result of the regression analysis and suggested laser settings are calculated accordingly. R² values will have a red background in case they are below 0.9 which is an indication inconsistent data and a bad fit. Suggested laser settings can not be reliable if R² is not at least 0.9 and should not be used.

More warning messages may appear depending on your current data selection and/or values entered as attempted change of refraction. It should be obvious that nomogram calculation can be given only for the range of data currently selected.

As soon as your data contains sufficient cylinder cases the second scatter plot will appear showing the achived cylindrical change of the laser setting for cyl. Cylindrical overcorrection appeared for cases above the 45° line, undercorrrection below. Cases where cylinder was induce are shown in the area under the x-axis.

Note: eyes where more than 1 D of cyl was induced (preop value increased by over 1 D) it will not be visible as yellow dot on the graph. 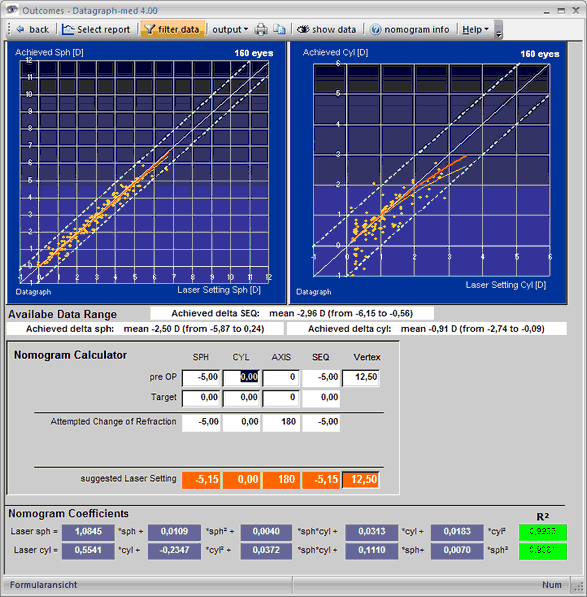 In case your selection of data consists of hyperopic astigmatism cases the background of both scatter plots will change color to dark green.